Cerrad is an example of Polish success here, and on the international market likewise – said Mateusz Morawiecki, head of the Polish government, at a recent press conference.  Mr. Morawiecki visited Cerrad headquarters in Starachowice on February 4th of this year, during which time topics related to the economy, support for entrepreneurs, the company’s operation during the pandemic and future investments were discussed.

The press conference, which was attended by Prime Minister Mateusz Morawiecki and Cerrad Board Members, focused mainly on innovative projects and investments that currently make the Cerrad Group one of the leading manufacturers of ceramic tiles globally. 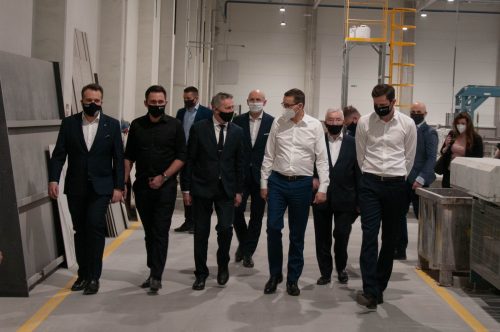 Cerrad is an example of Polish success here, and on the international market likewise.  New investments allow for greater production, which in turn translates into exports – admitted Prime Minister Morawiecki and added that he’s proudly observing how these small factories in the Świętokrzyskie Voivodeship grow into large companies that compete with some of the biggest ones in Europe.

Despite the existing reality caused by the pandemic, Cerrad managed to adapt to the changes by continually looking for new and effective solutions, while consistently implementing the chosen strategy.  The year 2020 was a time of uncertainty and many unanswered questions. We were also forced to shut down several manufacturing plants.  Fortunately, the government came to our aid. We were able to use the ani-crisis safeguards created for economic standstills and for keeping work places open.  In the end, we received 3,5 million zlotych, which not only helped to maintain employment, but to also increase it significantly – stated Dawid Cegłowski, a Cerrad Board Member, in thanks to the government for its support.

I’m glad that Cerrad was able to take advantage of the National Center for Research and Development funds for modernization purposes, from the financial safeguards for employment support, while at the same time helping and supporting hospitals in Starachowice and Radom. This sort of entrepreneurial attitude is a show of solidarity during these challenging pandemic times – stated Mateusz Morawiecki.

The prime minister promised further support for Polish entrepreneurs so they could help in rebuilding the Polish market as quickly as it is possible.  – It is crucial for Polish workers and companies that the return to pre-pandemic state of affairs takes place this year still.  It is possible.  I believe it as I look at the actual economy here in Starachowice – emphasized the prime minister. 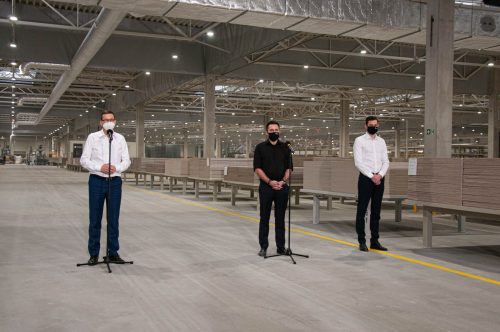 Th prime minister noted that the coronavirus pandemic is altering the global economy along with the supply chains, but sooner or later it will come to an end.  – Together, we will rebuild the Polish economy – he assured during his speech.

The prime minister also stressed that the latest data from the European Commission showed that Poland experienced one of the lowest recessions in the European Union during the pandemic. The head of government also argued that 2021 will in fact be very good for the Polish economy.

Cerrad is hoping and striving for the same, as it takes advantage of development opportunities to achieve long-term goals, and thanks to which is now holding one of the leading spots in the ranks for the most dynamically developing manufacturing companies in Europe.  The company is planning further investments and implementations of new and improved technologies in the production of ceramic tiles.

Cookies? Why not? We just want to adapt to your needs. By clicking on “Accept all cookies” you consent to the storage of cookies on your device. Cookies are stored in order to properly provide the services, and for statistical or advertising purposes.